This Blogging is turning into an addiction, once you start you just can’t stop (as the actress said to the bishop). And all these sexual innuendos also have to stop, people will start to think I’m a sex maniac, well unfortunately ladies I’m not (I’m simply a little crazy).

As you can imagine being crazy, I would expect to attract crazy people, which as it happens today when I attended a seminar on “The Law of Attraction” given by the excellent Philip Holden simply wasn’t the case. Our small group met at the “Lotus Tal-Qalb” in my little village of (I’m still not saying) on Gozo, and what a wonderful group of people they were. I’m not telling you their names as one of the few rules of the meeting was complete confidentiality, which when I saw how we all opened up was a good thing. Everyone said what was in their hearts, as Philip guided us through the process.

I have to say at this point that I thought I knew a lot already about the LOA, (how wrong I was).We went much further than what I’ve described in previous blog posts, (they were a few years ago now during a different life, I was in good old Texas then). We did all sorts of things, past life regression, meditation, but most of all, (with only one exception Philip) we cried our hearts out. Even though I was the only guy in the group (apart from P.H) I shared my feelings in a completely open and honest way (honesty is the best policy in everything, yes including blogs) and the tears rolled. We connected with our previous selves which I know may sound strange to those sceptics out there, but like I always say “don’t knock it ’till you’ve tried it”

When I first met Philip, just a few days earlier at another of his sessions, I really entered as a complete sceptic (he told me he realised that in today’s meeting) however I left that meeting full of questions and doubts. Today any doubts I had are now gone, I’m completely convinced, and while I won’t tell Y’all what to do (Y’all it’s that Texas slang slipping in again), it’ll be gone very soon, I can totally recommend you trying it (the L.O.A not the Texas slang ha ha). 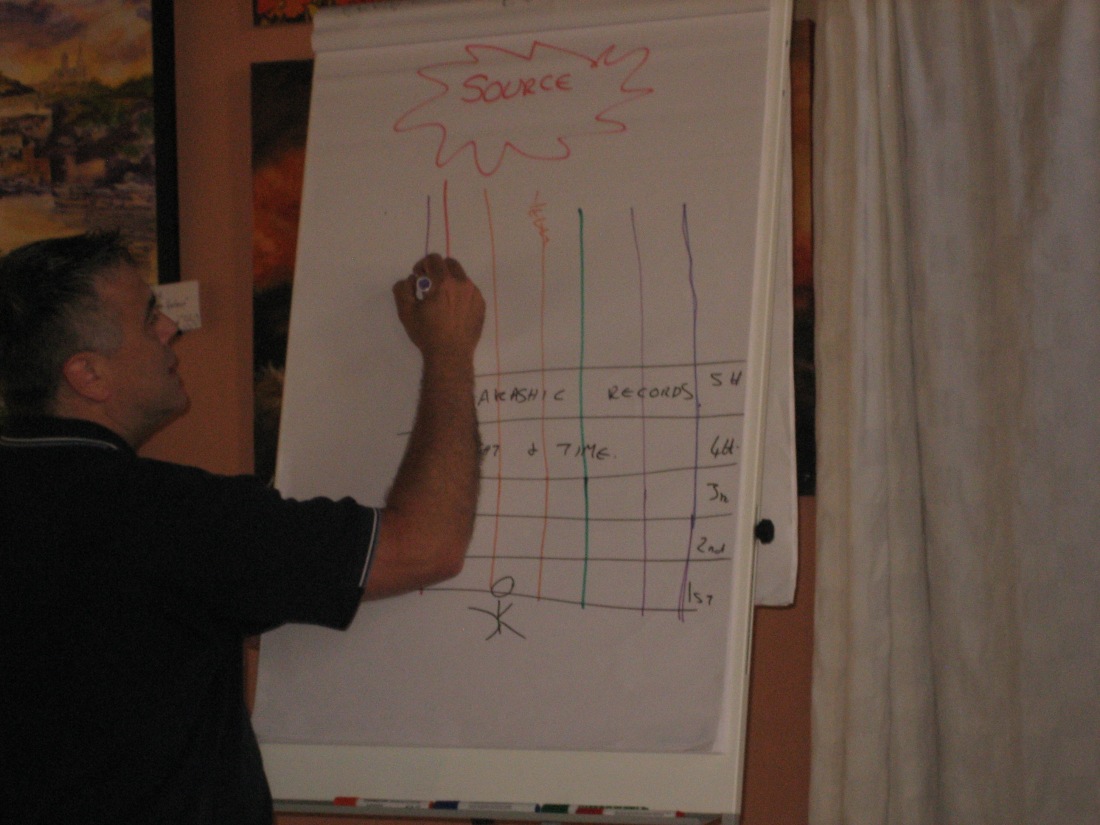 Philip started with some limited rules, which were extremely useful and helped keep the room “in tune with each other”. He taught us many techniques, without exception every one of his students experienced the palpable energy  in the room, even the toughest of us openly cried (ME). WOW! what an experience, we regressed to previous incarnations even me (in a way)! We talked openly about the experience, there was no bluffing, even those of us that were embarrassed to admit who they’d been in their previous lives owned up (me again), and what an experience that was. The tears flowed as our emotions came to the surface, and I rather embarrassingly admitted who I felt I had “experienced”.

Now as it’s all confidential I’m not telling what the five ladies in the room said, but I can and will reluctantly tell you what I experienced. I really have to qualify myself here, I’m not saying I was this person, that would be too great a leap of faith for you and for me, but somehow I definitely experienced this person’s life. I struggled with my hearing, which is quite bad now and I’ll explain why in a later post, (yep blame Texas again) but I still managed to stay on track maybe I diverted a little, but I caught up with my emotions. So who was this person? I really am embarrassed to say his name (and it takes a lot to embarrass me nowadays) but lets just say my initials are J.C and his were the same. I’ve mentioned him in previous posts.

Maybe it was because I was “hard of hearing” or maybe it was because I’ve been thinking a lot about Jesus Christ recently (I describe my faith in good old Facebook as a Christian Buddhist) as anyone who reads my blogs or are my F.B friends will know. I hope this isn’t regarded as blasphemy, because I’m certainly not the second coming. One young man sadly thought he was “The second coming” when I met him November 2014. It was in a psychiatric ward in Wales, unfortunately he was diagnosed as schizophrenic, and he was a really nice kid, he played guitar for us whenever we asked (wouldn’t harm a fly) and in my opinion he wasn’t crazy. In fact maybe he was saner than most so-called “normal people” but that will be another post for another time.

My “experience” was kinda like I felt what J.C felt. Believe me I don’t think of myself as religious. I would argue (and so would The Buddha) that Buddhism isn’t a religion (and that should be the subject of its own blog). In fact in my view religion has been the cause of much of the worlds troubles, whether it be Jews, Christians or Muslims, we continue to fight among ourselves, yet we supposedly believe in the same god. Well if I’m crazy so are all those Jews, Christians and Muslims. I know in this day and age that’s a dangerous statement to make, like Salmon Rushdie (and I don’t want to end up like him).

I know very well as it happens, people from all three of these religions and we all got one famously, too famously in one particular case (and that will never appear in a blog).The only group that happens to be tolerant of other religions are Buddhists, what does that tell ya?

So yes I experienced being in the manger, preaching, doing miracles and dying on the cross, and when J.C finally rose from the grave wasn’t that a kind of reincarnation? Well as I say I’m certainly not claiming to be him reincarnated or otherwise, but maybe because I got my wires crossed I simply experienced what Jesus Christ experienced, and it was mind-blowing for me. Yes I can hear some of you cynics saying Christ the Crazy Brit is really crazy, well I’ve never denied that, but I’m not prepared to keep quiet about the feelings that Philip brought out not just in me but the others in our group.

The stories were fascinating, some of us played a part in the lives of each others experience (some of the group may have been my three wise men and I know who Mary and Joseph were) but my lips are sealed (I’m sure that Philip won’t mind me saying he was probably the donkey, in fact I think he likes to think he’s built like a donkey, but that his fantasy), and I don’t think we need to go there.

We experienced other things which I can remember, but find it hard to explain the technique to get there, you’ll need to visit Philips website to ask for that information. Hey for anyone that didn’t realize that these blue highlighted words are “hyperlinks” to further information (I know some of us aren’t tech savvy) his website is www.philipholden.com. Hey I experienced something today that for once I find hard to put into words. Imagine that, the Crazy Brit stuck for words….

Excuse me I had to stop for a while, Bobbin, (my daughter Sarah) just rang to see how I was doing, we haven’t spoken since we said goodbye before I left. I need to prioritize things, she and my boys (grandsons) Emin and Oliver will always be my greatest priorities, and the ones who I can trust and as  we know “Trust is like virginity, once you lose it you never get it back” well that’s what they say. But I believe that people can earn your trust once they’ve lost it, provided both parties want the same thing (The Law of Attraction).

At the end of our day Philip asked us to pick a card from a set of cards I’d never seen the like before. We all picked our card and showed it to everyone P.H then read directly from a book that came with the cards and described what our card said about us. This was the final straw for me, yet again he hit the nail on the head, or should I say the card did.

For those that can’t see my card its Mattraya  now if that’s not convincing you are a very sceptical person and I strongly suggest you stop reading my blogs.

We all hugged and said our goodbyes, yep there was a little kissing involved, but nothing the only straight guy in the room couldn’t handle, I felt we’d really bonded today and we went away in an air of enlightenment, peaceful, happy and harmonious. And isn’t that what I said I’ve been searching for all these years.

I like to leave on a funny note, so talking about virginity, (I know we weren’t) but yesterday I learned the translation of the Maltese name for where I live “Virtu Court” believe it or not its Virgin Court. Now as I said to a friend only today, it’s a long time since I’ve been in a virgin (crap I’m not supposed to make sexual innuendo and Bobbin may read this) but as a funny guy used to say “I know I’m awful, But I like it” can any of you Brits out there remember who that was? let me know in the comment below if you can.

(Hey whose crazier here, me for writing this stuff or you for reading it) Gotcha x

Peace, happiness and look for harmony (it helps).

Published by The Crazy Brit

Well what about me? For what it's worth I've travelled far and wide I was born in the UK lived & worked in the US for 10 years came back to the UK now live in Gozo (Malta) one of my favourite places is Bali. I have had several blogs running at the same time but I'm in the process of integrating all blogs under this one. (wish me luck:-) View all posts by The Crazy Brit

4 thoughts on “THE LAW OF ATTRACTION”